In the Delhi Daredevils v Kolkata Knight Riders match at the Feroz shah Kotla stadium in New Delhi, the two teams were out to fight for a lead in the points table. KKR with the spirit, form and momentum they are carrying would have fancied their chances against a rather budding unit of the DD. But one of the biggest threats, someone who could rip apart the Knight Riders bowlers Yuvraj Singh was dismissed by the leggie Piyush Chawla and it almost looked like he tricked Yuvraj to get the better of the left-hander.

It was a length ball from Chawla pitched on the leg stump, Yuvi tried to sweep the ball, but did looked in two minds and never actually connected the ball and the bat. It took an edge and went behind the wickets to Robin Uthappa, while Yuvraj could not make out where actually the ball was he moved out of the crease. This gave the wicket-keeper a chance to put the bails off and so did he; the southpaw was well out of his crease.

He almost gifted Piyush Chawla his 100th IPL wicket in his 100th IPL match. Or we can say Chawla and Uthappa fooled Yuvi and got him out.

Watch: Piyush Chawla and Robin Uthappa fool Yuvraj Singh and get him out:

Who is Azhar Ali – Get to know the New Pakistan Captain 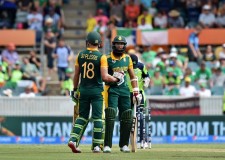 Twitter trolls England after their Elimination in the 2015 World Cup