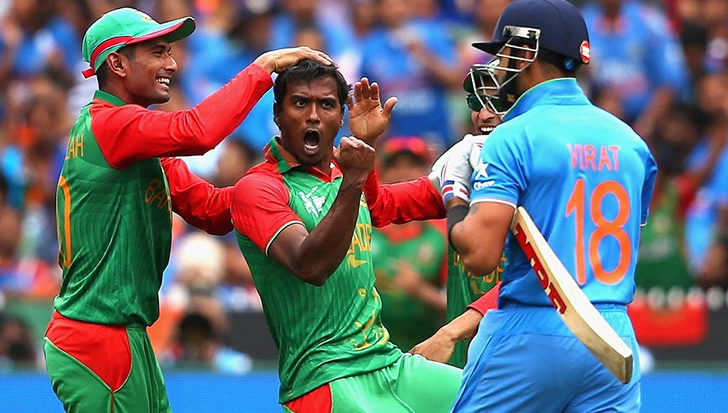 First of all, congratulations on making it to the semi-finals of the World Cup. It is a superb achievement from a team that failed to win a single game on Australian soil for over two months prior to the World Cup. So, prost.

Now on to the main point of writing this open letter.

How much more selfish can you guys become before realizing that the world doesn’t rotate around the BCCI? Almost everything that is being done in the world of cricket now has India in the centre of its attention. By now, many of you will call me bitter about Bangladesh’s exit at the hands of India, but I will ignore that notion and continue to elaborate my point.

I am fully aware that India is the money-market of cricket. This is a country that has 1 billion people who would sell their souls to the devil for the sake of cricket. Hence, wherever the Indian team goes, money follows – and so does the power.

The Indian cricket team now find themselves in the semi-finals of the World Cup and are most likely to win the tournament because of their fine form added with luck. For India and Indians, this is already a successful tournament. But I doubt whether we can say the same for the rest of teams or even the hosts, for that matter.

This is not an opinion based on on-field performances, it is beyond that.

Let us have a closer look at what has happened in this World Cup yonder the scope of on-pitch performances.

The main criterion of this World Cup has been to satisfy the Indian fan base exclusively. Even the feelings of the fans of the hosts – Australia and New Zealand – are not being respected. The members from the cricket associations of different countries who pay a lot of money for tickets every year aren’t getting their honorary and deserving free entry to the stadium.

Official broadcasters, Star Sports India, lag behind the standards of Channel 9 and Sky Sports. Also, the absence of Australian cameramen, who know the dimensions of their grounds thoroughly, has made the coverage just about average.

Why are there no Australian cameramen? Because all the cameramen have been hired from India and South Africa, and they aren’t meticulous when it comes to Australian grounds’ proportion like the locals are. Matches that don’t include the Australian team are only shown on Pay TV and Foxtel, and not on the free-to-air Channel 9 and that’s why we are witnessing a huge lack of viewers.

Finally, the lack of power of the local hosts is baffling. During the coverage of games, Star Sports have had many glitches that include loss of picture and sound, but these hiccups weren’t dealt with efficiency since the local Australian and Kiwi broadcasters had no control over the telecast and they still don’t.

Another disgrace is the big screen. Instead of showing timely replays of important events of the match, it used as an advertising block. So why use it to show cricket at all? Why not just keep playing ads over there during the whole game? Because, clearly, the fans that paid their hard-earned cash (might sound like an alien term to you) came to watch advertisements and not timely replays of real-time events.

I know that money is an important factor. Money doesn’t guarantee happiness, but it pretty damn well guarantees power. And you guys have that in plenty, but how much power does one need anyway?

The entire cricketing world bows to your feet. Members of different association wouldn’t hesitate for a single moment to dive in a bottomless abyss if BCCI asked them to. That’s the supremacy you people possess.

The root of all that authority is not money, it is the people – the Indian cricket fanatics. More than half of fans of the game hail from India, but that doesn’t mean that the fans of the other countries should be deemed as pushovers.

When it comes to passion, your neighbours – my people – are just, if not more, zealous. And so are the fans of countries like Pakistan, Australia and so on. However, this time, thanks to the overuse – or shall I say, misuse – of power, many Australians have decided to boycott the event. A look at the stadiums during games is a good testament of that. They are not happy and they are not alone at that.

At this point, I feel the obligation to share my story. Once upon a time, and that time wasn’t so long ago, I was an ardent fan of the Indian cricket team. So much that I loved them more than my own country’s cricket team. In fact, when Bangladesh knocked India out of the 2007 World Cup, my sadness at seeing Tendulkar and co. out of the tournament was more than the joy of seeing my own country go to the next round.

Now, however, there isn’t a single cell in my body, let alone soul, that could urge even an ounce of support for the Indian cricket team. In fact, I can’t even be bothered to watch the game, be it even Bangladesh’s games, and it’s because of the World Cup that a remote interest was sparked in my football-loving mind – that’s how much damage you have done to the kid who couldn’t live even a single day without thinking about cricket.

And you, the BCCI, are the biggest reason for that. You are putting people off from watching the game because of your narcissism. And that is happening at an alarming rate.

Cricket is a religion in India, but contrary to what you seem to believe, it is not the only country that watches or loves it. Here’s a fun fact which you probably don’t know – when an ODI game is about to take place in my home city of Chittagong, people make their way to the ticket counter three days before sales open. THREE.

They bring pillows and blankets with them to sleep in front of the ticket counter. If you don’t believe it, all you have to do is send someone to see it, but you won’t do that because there’s no money involved. And you would rather watch Twilight saga over and over again than do something that doesn’t bring money to you.

Concluding the letter, I humbly request you – the BCCI – to think about the fans of cricket in general and not just about the money. You wouldn’t even care for Indian fans if they didn’t bring you money – this is the hard and cold truth. So, please, for the love of cricket and to save it from being an only-India sport be a little, just a little, generous and think about the other teams instead of treating them like a used tissue paper.

P.S. I am not at all bitter about Bangladesh bowing out to India due to controversial umpiring decisions. Things like that happen. Even we reached the quarter-final with the help of a wrong decision going in our favour. However, I do hope that the umpiring standards improve because this is the greatest event of the game and umpiring levels like this will only put a bad impression on people who are new to the game.