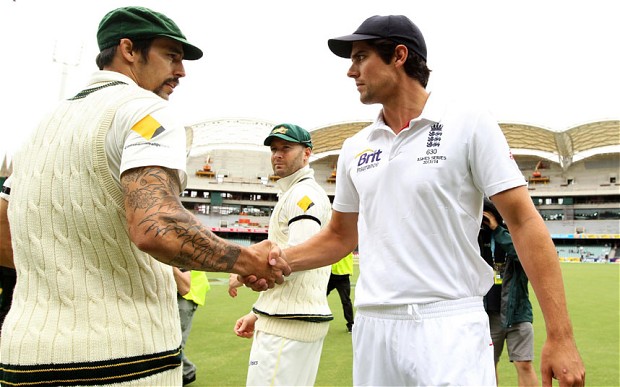 Speaking ahead of the Ashes, the English captain Alastair Cook has thrown up a challenge to his Australian opponent Mitchell Johnson challenging him to repeat his stellar performance in the Ashes three years ago. Cook sounded skeptical of Johnson’s chances in this year’s Ashes and said that his jaw dropping performance in the previous Ashes whitewash as a rare vein of form that most probably doesn’t seem to repeat.

Cook, who barring any injury will finish this series as England’s second-most capped player 14 appearances behind Alec Stewart, withstood the poorest series of his captaincy career when he scored less than 250 runs from 10 completed innings in Australia.

On four of those occasions he was ensnared by Johnson who finished with 37 wickets for the summer, and instigated a forgetful spell for the opener who went 35 Test innings stretching across almost two years without scoring a century until his breakthrough hundred against the West Indies in Barbados last May.

Cook believes it is not only the switch to the British pitches that he knows so well that will see him better placed than he was 18 months ago to contend with the threat of Johnson in the coming five-Test series that begins at Swalec Stadium in Cardiff tomorrow (Wednesday).

Cook was quoted by cricket.co.au saying, “Clearly the conditions do change a little bit, obviously the pace and bounce in these wickets aren’t as much,” Cook said today.

“And Mitchell (Johnson) had the series of a lifetime, pretty similar to what happened in 2010-11 with my form, you get on a bit of a roll and you can do no wrong.

“Always credit when it’s due, he bowled very well and bowled quickly. “Whether he can repeat that, that’s the challenge and we’ve got to make sure we cope with it better if he does.”

Cook believes that the current English set up is entirely different from the side that lost the Ashes in a dismal fashion 5-0. According to Cook the young English side has what it takes to lift the much craved Ashes urn.

“That side at the end of 2013-14 was right at the end of its life cycle, I suppose,” Cook recalled as England prepared for to train under grey skies in Cardiff today.

“A lot of players have gone from that side who were kind of hanging on.

“In this side we’ve got two or three slightly older statesmen I suppose you could call them, with 80-plus caps, and the majority of the side is under 15 caps and are really excited about their future.

“They’ve got the chance to create their own history.” Cook said.

The previous line up consisted of marquee names and established campaigners like Graeme Swann, Matt Prior, Kevin Pietersen, Jonathan Trott and Tim Bresnan. In their places come Adam Lyth, Gary Ballance, Moeen Ali and Jos Buttler who, as Cook points out, come without too many scars from campaigns past and provide an ideal counter-balance to the old hands such as James Anderson, Stuart Broad, Ian Bell and the skipper himself.