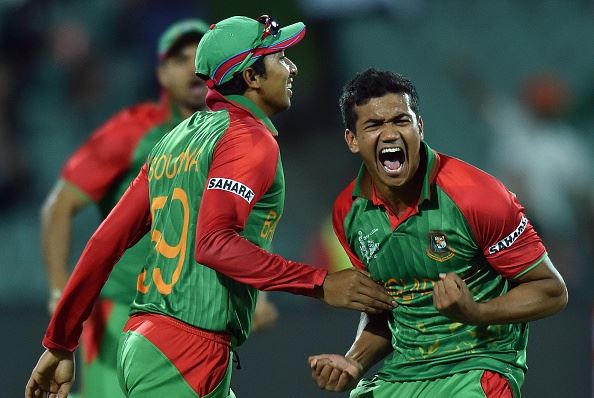 England have been knocked out of the 2015 Cricket World Cup after succumbing to a 15-run defeat against Bangladesh in a Pool A clash of the World Cup today. After being inserted into bat by England skipper Eoin Morgan, Bangladesh posted a competitive total of 275/7 from their 50 overs thanks to Mahmudullah’s maiden century in One-Day International (ODI) history.

In reply, England got bowled out for 260, with the failure to build any substantial partnerships costing them dearly. Courtesy of Bangladesh’s famous victory, they now have 7 points in 5 matches and are guaranteed a place in the quarterfinals while England will be going home after playing a consolation game against Afghanistan next.

Here are the best tweets from the match:

I still think the minnows should be retained. Plucky England has spread so much joy in this #WC2015. #ENGvBAN

DO NOT SAY WE HAVENT PRIORITISED ODI CRICKET! We played a back to back Ashes to make sure England played 6 months of ODI’s before this WC!

Don’t worry…. I am sure some positives will have come out of this WC for @ECB_cricket #MyArse

The captain of Afghanistan says that they will not take England lightly.

Bangladesh celebrating like they win 1971 war! And this time they do without India help. #ENGvBAN

“It’s obviously a surprise that we’re knocked out this early.” – Eoin Morgan. Speak for yourself.

At least England have avoided another quarter-final exit. We’d have taken that before the tournament. #takethepositives

Hope nobody has called it an ‘upset’, for this isn’t. Dedicate this win to the Bangladesh fans who stood by the team in thick and thin.