Sangakkara’s great run in the ongoing World Cup started when he struck 105* against Bangladesh at the Melbourne Cricket Ground (MCG) and has followed it up with scores of 117*, 104 and 124 against England, Australia and Scotland, respectively.

Here are the best Twitter reactions to Sangakkara’s record-breaking innings:

Kumar Sangakkara becomes the first man to look bored out of his mind while scoring a fourth consecutive World Cup ton. #CWC15 #SCOvSL

Can only stand and applaud cricket’s Superman. Batman actually. @KumarSanga2 genius is an understatement. #SLvSCO

4th century in a row. And this man wants to quit!! #Sangakkara

Sangakkara on auto pilot as a batsman these days. Things just happening and he is watching all the fun.

Teacher: Give me a synonym for consistency. Student: Kumara Sangakkara. 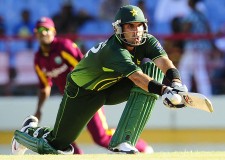