Upon announcing their arrival as a fully-fledged Test team in 1982, they spent their time either flattering or flattering to deceive. Originally starved of opportunities, persistence and unburdened talent allowed them to flourish at the highest level – they crowned their progress with a stunning victory at the 1996 World Cup. That was Sri Lanka’s route to the top, it seems Bangladesh may be going through a similar process.

The growing-up phase in any walk of life is typically tough. All too often, Bangladesh appear to be drunk on their own recklessness, particularly with the bat. They have played good cricket in patches, not in significant blocks. Frustration has run as deep through players and management as it has the fans.

Since being awarded Test status in 2000, Bangladesh have enjoyed fairy tales and endured nightmares in equal measure. A teenage Mohammad Ashraful struck a Test century in his first Test and condemned Australia to an embarrassing ODI defeat in England in 2005, but now, the golden boy, still only 30, is serving a five-year ban for spot-fixing. Such unfulfilled promise has been equally apparent from a team perspective. Bangladesh dealt out a 4-0 hammering to New Zealand in an ODI series in 2010, but just a few months on they contrived to lose a Test match against Zimbabwe – a side that was making a return to the five-day game after six years in the wilderness. Rock bottom was arguably reached last year when they capitulated in their own backyard to Hong Kong in the World Twenty20. For all of the evident potential, it looked like Bangladesh were ever-destined to scupper it. 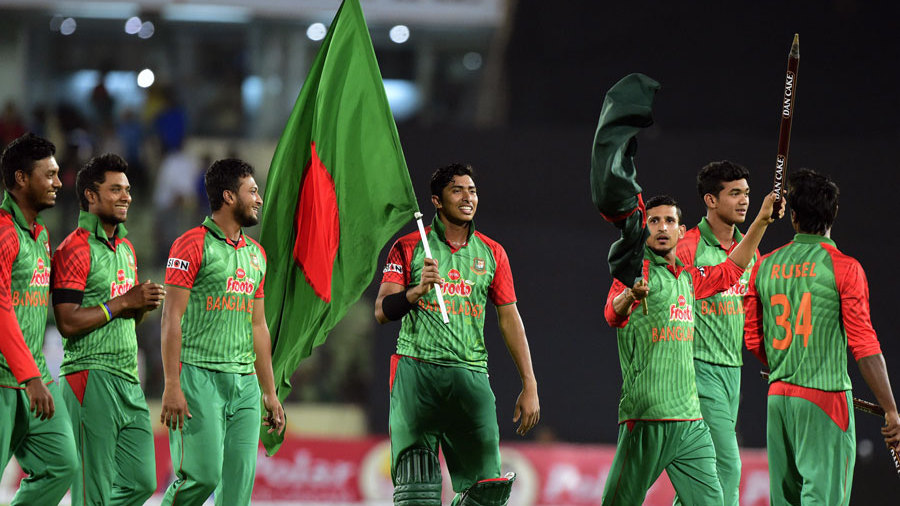 While the fanfare of the Indian Premier League (IPL) – and on a lesser scale West Indies’ home series against England – captures most of the current cricketing attention, Bangladesh have been quietly, but successfully, duking it out with Pakistan. They took an unassailable lead in the three-match ODI battle courtesy of two Tamim Iqbal tons before a maiden hundred from Soumya Sarkar clinched a 3-0 triumph. In doing so, they demonstrated that their best-ever quarter-final showing at the World Cup last month was no fluke.

Exercising a level of caution may be well-advised; Pakistan are in the midst of an all-too-common turmoil following the retirement of captain Misbah-ul-Haq and Shahid Afridi. And in the World Cup, it was England who were their major victims – a team deep in the clutches of confusion, particularly in limited-overs cricket. But for Bangladesh, these are still major scalps over established Test nations, and when considering the Pakistan wins, the margins have been convincingly large: 79 runs, seven and eight wickets, respectively. They now look primed to advance into the upper echelons instead of sliding back into Associate territory.

Unlike Sri Lanka, who have added glorious batsmen and mystery spinners to their country’s specialities, Bangladesh are yet to etch any legends into their cricketing folklore. That said, a few of the incumbent crop have the ability and tenacity that youngsters can aspire to.

Tamim and Shakib lead the way

In 2010, when former England opener Geoffrey Boycott suggested Bangladesh weren’t good enough for Test cricket while in the commentary box, Tamim Iqbal responded by blazing a brilliant hundred at Lord’s and firing another at Old Trafford a week later. England still cruised to a 2-0 series win, but it was the plucky Bangladeshi opener with his tigerish qualities that hogged the plaudits. The left-hander deservedly won the Wisden Cricketer of the Year award for his exploits that season – in nine of his 14 Test innings, he surpassed 50 and made a hundred thrice.

There have, of course, been leaner times, but a haul of 312 in three innings during this Pakistan series indicates he is closing in on his best once more. And, much like Ashraful before him, Tamim’s longevity makes it easy to forget he has just turned 26. The majority of his career and perhaps his most productive years remain ahead of him.

Shakib Al Hasan is another fine product of Bangladesh cricket. The all-rounder has gained international acclaim for being one of the world’s best in his profession, often occupying the top spots in the ICC’s all-rounder rankings in all three formats – at the moment he is at the top in both Tests and T20s while a close second in ODIs. The 28-year-old has become highly sought-after by T20 franchises globally and has represented two-time champions Kolkata Knight Riders in the IPL.

The list goes on. Wicketkeeper Mushfiqur Rahim, lion-hearted pace bowler Rubel Hossain, Bangladesh have talents in all areas, and crucially, they are nearly all the right side of 30; they have ample time to develop. Captain Mashrafe Mortaza is one man in the unit older than 30, and he acts as a determined senior figure of the ODI squad despite being plagued by injury. In Tests and T20s, it is Mushfiqur who leads, having taken over in 2011 and he may well retake the 50-over reigns once Mortaza departs.

While big strides have been made in ODIs for Bangladesh, the Test barrier continues to be largely unbreached. A return of seven wins in 88 matches – five over Zimbabwe and two versus an underpowered West Indies in 2009 – along with 70 losses leaves much room for improvement. There have been signs of inroads since 2013. Although just five defeats and two draws against both Sri Lanka and New Zealand isn’t earth-shattering by any means, if nothing else, it’s proof of a side that now can compete at the top. A 3-0 thrashing of Zimbabwe at home a few months ago signalled that Bangladesh were ready for new challenges. The two Tests with Pakistan in May are just that. A massive test.

The fragility of Pakistan makes them as fallible as any from the ‘top eight’. They will be bolstered by Misbah’s presence, but the ODI calamity has left them wounded. The wounded can indeed be dangerous, but it’s a period which also finds them at their most vulnerable – Bangladesh have to go for the kill in true tiger fashion. This is a prime chance to notch a win over a full-strength Test nation.

As Aristotle once said: “One swallow does not a summer make.” Neither does a few and more steps need be taken before it can be confirmed that Bangladesh are on the route to the promised land. But optimism is sprouting. The seeds planted years ago are beginning to bear fruit. After years of peaks and troughs, they are finding the trait they have always lacked: consistency. Now, they must make the most of it.