At the 2015 World Cup, we have an all-Asia quarter-final game as India face Bangladesh at the picturesque Melbourne cricket Ground (MCG) on March 19th, Thursday. This will be the third time the two sides face each other at the World Cup with both teams winning 1 against the other. The first match was at the 2007 World Cup when Bangladesh pulled off an upset, while India recorded a massive victory in 2011 courtesy of centuries by Virender Sehwag and Virat Kohli.

They started the World Cup with a lot of question marks hovering above them, most notably – Whether they would be able to repeat the 2011 feat and defend the world title following a horrendous winless tour Down Under. The fixtures they had at the beginning were possibly the toughest, but they sailed through those two games against Pakistan and South Africa with flying colours.

India has remained unbeaten thus far in the tournament. However, they were taken to the wire by West Indies and Zimbabwe, but came out unscathed and topped the pool. Their bowling, which is generally the scourge of the Indian team, has been spectacular while they were fielding at a very high standard.

India have managed to bowl out each of their opposition, having taken 60 wickets in 6 games with Mohammad Shami as high as No. 2 in the list of the highest wicket takers at the World Cup. Even though they leaked runs against Zimbabwe towards the end, the pleasing aspect was that they were picking wickets at regular intervals. They have never let a partnership grow, which has been the key to their success at the tournament so far.

Batting has always been India’s strong suit and the men with the willow haven’t disappointed. They registered their highest chase in World Cup history when they chased down Zimbabwe’s total of 287. The only concern for MS Dhoni would be the form of Rohit Sharma and Ravindra Jadeja, who haven’t come good thus far with the latter largely untested.

At the start of the campaign, injury concerns over Tamim Iqbal threatened to throw their World Cup preparations haywire, but things have settled down very well for the Bangladeshis. The strength behind this team has been in the collective effort they have put in at the tournament without relying on a single player, like past Bangla teams.

In what were supposed to be alien conditions for the Tigers, they have adapted and excelled in every game apart from their match against Sri Lanka. Even in the loss against hosts New Zealand, they came very close to snatching a victory while their victory against England could be considered better than their win over India nearly 8 years ago as this took them to the knockout stages for the first time in the country’s history.

Mashrafe Mortaza’s experience, Taskin Ahmed’s swing and Rubel Hossain’s pace have done this team a world of good and so has the experienced Shakib Al Hasan’s spin. They have been pretty impressive in their fielding as well. You have to give it to Rubel for that heartwarming performance against the Poms that pulled them into the quarters.

They have found a new batting hero in Mahmudullah, who has scored 344 runs in the group stages with back to back centuries against England and New Zealand. Tamim Iqbal, Shakib and Mushfiqur Rahim were expected to do well with the bat and stack up the runs on the board. Despit Tamim’s erratic form, Shakib and Rahim have provided substantial support to make for the lack of runs at the top of the batting order. Once Tamim, Nasir Hossain come back to form they will certainly be a side to reckon with. 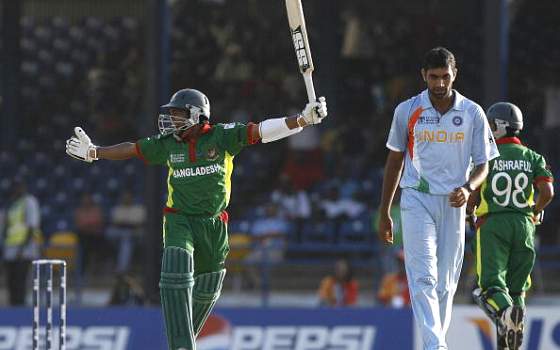 The result in the 2007 World Cup will certainly play on the minds of both teams. But Bangladesh have to make sure that they do the basics rightly and grab all the half chances that come their way. India, though, should continue what they have been doing until now in the tournament.

Mashrafe was rested in order to avoid the ban, if they had been penalised for another slow over rate against Kiwis which was well thought out. Both the teams will be at their full strengths to fight it out in the knock out stage. While it will be a historical event in sports for Bangladesh if they make it to semis, it’s a matter of pride for the Men in Blue to avoid a repeat of 2007.

India – Shikhar Dhawan, Virat Kohli and Suresh Raina will be key with the bat while Rohit Sharma can behis imperious self by firing against the men in green. Mohammad Shami and Umesh Yadav will need to keep the pressure on Bangladesh with the new ball alongside Mohit Sharma and Ravichandran Ashwin.

Bangladesh – Mahmudullah, Shakib and Tamim hold the key for the Tigers – the longer these batsmen bat the better it is for them. Opening bowling will be key to contain the men in blue and stop the run riot. Building partnerships while batting is as important as breaking the partnership while bowling. Mashrafe, Taskin and Shakib will have their task cut out.

The venue has hosted the ‘92 cup finals and once again will be hosting the final come 29th March. The crowd will play a huge part at the venue as the South African contingent was outnumbered when India played them in the group stages and it is expected the supporters for the two-time World Cup winners will be more than the supporters for Bangladesh.

The pitch will be conducive for fast bowlers with a bit of juice early on in the innings. Historically the average score has been around 260 while batting first and with this being a knock out game, a score of around 280 to 300 should be considered a winning total for the team batting first.