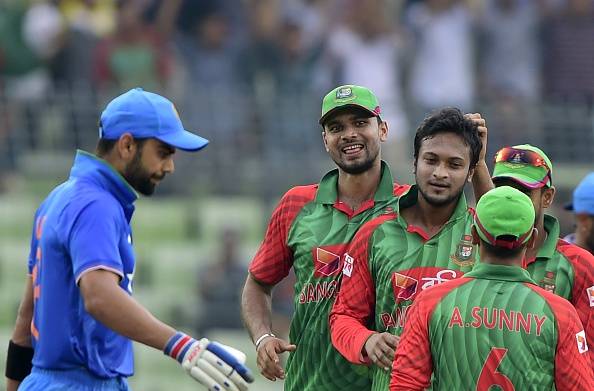 “Everything is created twice, first in the mind and then in reality.” Thus wrote Robin Sharma in his “The Monk Who Sold His Ferrari: A Fable About Fulfilling Your Dreams And Reaching Your Destiny”. Perception matters. What we actually see and what we want to see are two different things. Situations are like blank canvasses; our opinion of them informs our understanding of them. Perception colours reality. The ongoing ODI series between India and Bangladesh is a case in point.

Everyone in India knows that not only have Bangladesh won the first two ODIs, but they have won them convincingly. Predictably, the knives were polished, sharpened and drawn out in the manner popularized by the Vikings. The press has ripped apart the Indian team like a pack of wild dogs, with special treatment reserved for MS Dhoni.

Is it fair? Probably not. Does most of it make sense? Definitely not. But is it unexpected? Only if you believe that Santa and the Easter Bunny cavort around a flat earth when they aren’t fulfilling their holiday commitments. It’s the sort of occurrence that comes around once in a blue moon, although full moon would be apter given the number of hacks that have come out of hiding, spewing their spiel.

Skipping over the usual “darkest day”, “ashamed nation”, “ungrateful brats” and “Dhoni has let down India” headlines, it was the King of Quacks, Sarfraz Nawaz that caught my eye. (For those wondering why she hasn’t been blamed, Anushka Sharma was recently taken into custody over allegations that she was the second shooter on the grassy knoll and so could not possibly sabotage the Indian team).

Sarfraz believes that it was not a case of Bangladesh winning, but India losing. Why? It is a mystery that even Hastings or Watson could solve, it is obviously “a conspiracy” to prevent Pakistan from qualifying for the Champions Trophy. Never mind that if Pakistan didn’t pick has-beens, never-going-to-happens and actually learned how to catch a cricket ball they wouldn’t be in a situation where they had to rely on other teams to qualify.

A desperate plea for attention veiled as patriotism; what may have been lost amongst the absurdity of Sarfraz’s remark is the perception he and many others have of the Bangladesh team. What must be taken away from this is not the accusation that India underperformed, but the insinuation that Bangladesh were incapable of beating India. This is the same Bangladesh that recently whitewashed his native Pakistan. And Zimbabwe. And knocked England out of the World Cup.

Why should every Bangladesh victory be considered an upset?

Bangladesh’s position in world cricket can be summed up in one patronizing word – “upset”. A decade and a half after gaining Test status, they have made the tag their own, rivalled only by South Africa and their ubiquitous “chokers” tag in terms of perception colouring a team’s reality.

Just as every South African loss is a “choke”, every Bangladesh victory is an “upset”. Bangladesh cricket has at various times played the role of charity case, idiot sibling, ugly stepchild, petulant adolescent (it was the no ball heard around the world) and their most famous incarnation, David – of ‘David and Goliath’ fame.

A tag that has never been applied to them is that of viable contenders. To be fair, this is a team that lost to Hong Kong on home soil just over a year ago. A team that is used as a cautionary tale whenever that pesky business of Ireland gaining Test status comes up. A team that has comprehensively beaten a full strength Team India. Oops!

Indian cricket has always tolerated Bangladesh cricket, content to let it have any crumbs that fell off its table of plenty. That is what has made this loss so hard to, if you will pardon the pun, digest. David scraped, clawed and kept jumping back up every time Goliath knocked him down. He did not waltz in and knock him flat on his face and then do it again a couple of days later.

These losses were not David felling Goliath, they were Maximus notching up victory after victory. Everybody loves an underdog victory, but very rarely has the underdog clinically and systematically knocked the heavyweight out. It is not the losses that have hurt as much as the realization that India were beaten by the better team. India have lost before. And they will likely lose at some point in the future as well.

Failure is imminent when you play sport, always lurking around the corner. These defeats must be seen for what they were; the better team prevailing. If India play their best cricket or close to their best, they will likely demolish Bangladesh. Bangladesh may have been the better team only on the day, but that is what sport is about.

India played terrible cricket the last time they toured too but won 2-0 with one match being washed out. It is worth noting that speed merchant and king of swing, that amalgamation of Mitchell Johnson and Dale Steyn, Stuart Binny helped himself to figures of 6-4 the last time these teams met. India have at times been so bad that it would have made Michael Jackson blush, but the old Bangladesh would have found a way to be worse.

No shame in losing to Bangladesh

If mediocrity was a game of limbo, Bangladesh were the undisputed champions, taking their cue from their opponents and lowering the bar to either get hammered out of sight or somehow snatch defeat from the jaws of victory. Not this side.  It is alright to be upset at these losses. Feel aggrieved. Feel pained. But not ashamed. There is no shame in losing to the better team.

India and the world must change their perception of Bangladesh, or accept the blank canvass that is reality. While the past speaks for itself and this may be a false dawn as far as the future goes, in the present they are a force to be reckoned with, at least at home.

The cricketing world needs to stop treating Bangladesh like the awkward child at the talent show that gets the uncomfortable, patronizing applause at the end of a terrible rendition of ‘Who Let the Dogs Out’. Even when they win, it is somehow about how their opponents have failed and not how they have succeeded.

At the end of ‘Gladiator’, the following words are uttered over the corpse of Maximus, “He was a soldier of Rome. Honour him.” He had earned their respect through his deeds, and they shone through even in defeat. Irrespective of what happens in the game today, Bangladesh must be respected. They have earned it through their deeds.

To paint a loss as proof that the previous two victories were flukes or label the third victory another upset would be to do them a disservice. Unpopular as this opinion may be, this may not be India’s “darkest hour”, but Bangladesh’s brightest.

Win, lose or draw; for the briefest, most fleeting moment Bangladesh have shed the image of David and are embracing the countenance of Maximus. Honor them.