Recently retired Sri Lankan run machine, Kumar Sangakkara, said that he enjoyed batting with Kevin Pietersen and belives that the England team needs him back at the top level of cricket.

“The presence of KP is very important. When he walks out into the middle, his confidence and aura create immediate pressure on the bowling,” said Sanga.

“You have a fantastic player but there has been some controversy and strain in the relationship between him and the England and Wales Cricket Board (ECB).”

Hope they iron out differences: Sangakkara 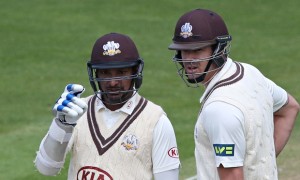 Speaking on the importance of having KP in the England side, he said: “I think the spectators want to watch KP in the middle and, when you have a batsman of that stature and ability, I reckon even the side would like him there.”

“It’s not my call to make but I just hope they iron out their differences. He’s an out-and-out match winner.” he 37-year old added.

The duo of KP and Sangakkara are playing for the same county side this season – Surrey. On the first day of the County Championship season-opener at Glamorgan on Sunday, they batted together for 37 minutes. Pietersen got out after scoring a 28-ball 19 but Sangakkara, who is making his first class debut for Surrey, continued his good run of form from the World Cup with a 230-ball 149.

Pietersen hopes that a successful stint with Surrey would lead to a comeback into the England side.